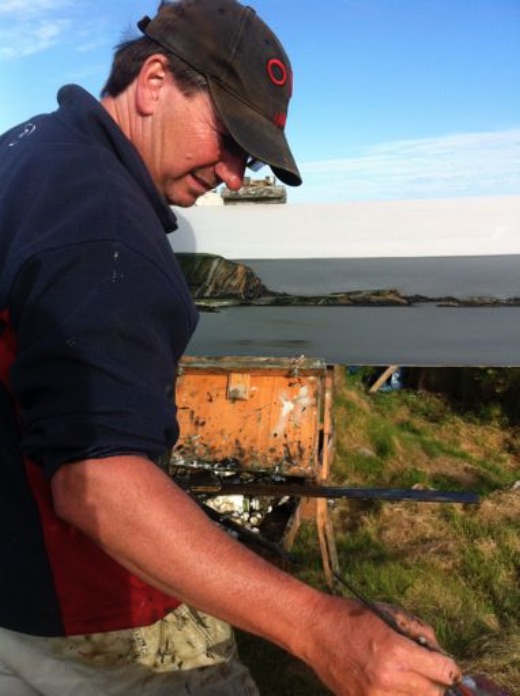 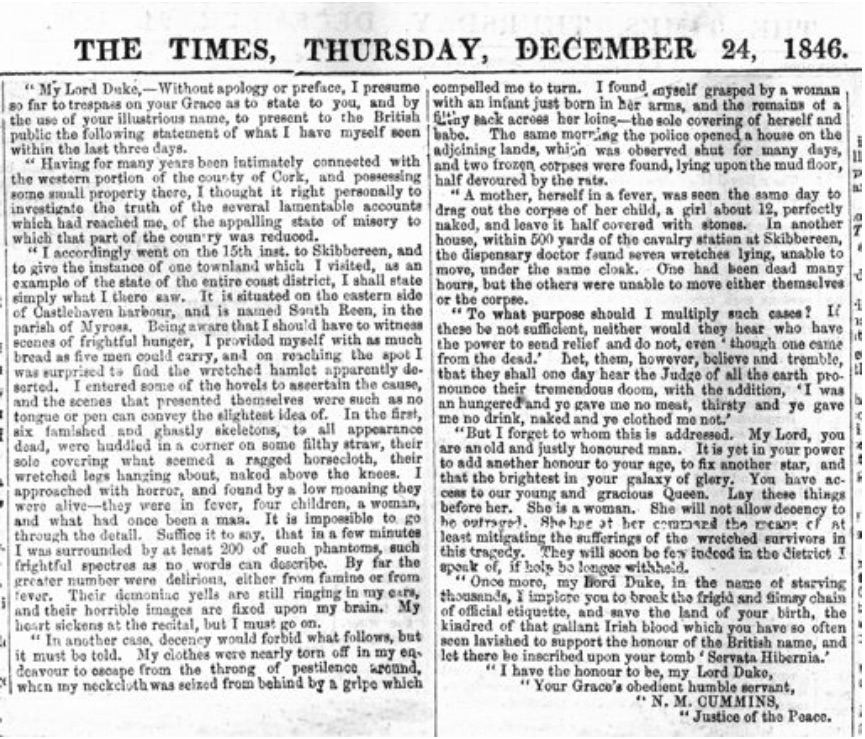 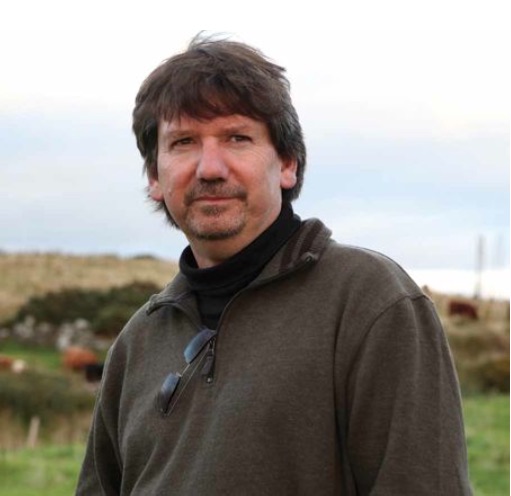 “Art is an argument between what a thing looks like and what it means.”

The stone tomb of Anne Sullivan is situated on an elevated mound in Myross Cemetery, a perfect plinth to hold my field easel. This spot gives an unfettered view of High and Low, the islands I have been painting for the past year. It may be appropriate that I have chosen a graveyard from which to paint, for some argue that painting itself is dead, mortally wounded in the 20th century battles between high and low culture, with the coup de grâce delivered by contemporary technology.

Unlike recent culture wars, High and Low Islands have been sculpted by the elements over millions of years, the fissured rock hoisted out of the sea by ancient and powerful glaciers. Covered in lichen, the stones glow golden in the evening sunlight, which casts deep shadows into the crevices. A lush grass covers parts of High whose green can only be put down with darkened cadmium and warmed with orange. I only paint it in summer, on calm evenings, for at other times of the year its position and the sun’s trajectory put it in shadow. From where I stand a pareidolia forms, the islands look like a dog lying on its stomach. When the breeze is just right, you can hear the throaty yelps emanating from those other dogs of the sea, the ones who make High and Low their home.

A currach once carried coffins out to a cemetery on Low; according to folklore bones can still be seen protruding from the sands on the beach. The sandy cemetery closed when two men and a coffin were lost on a fateful voyage. The way it was told, it might have been recent history, however the ‘new’ graveyard has tombs that date to when a simple rectangular stone marked the spot. It must be pre-20th century. I can attest that it is often visited. Loved ones of those who are buried, locals out for a walk, tourists for the view, Americans and Australians looking for long-lost relations and elderly fishermen trying to predict the weather, they all converge on this spot. One stranger tells me that bodies from the Lusitania are buried just inside the wall and another shows me where he himself is to rest eternal. Upon learning where I live a man points out that the tomb I have been painting on is that of the woman who used to live in our house. In keeping with all of the visitors my informant silently drifts away as the RNLI lifeboat draws a zinc-white line across the sea.

The early 20th century census confirms Anne Sullivan lived in Reen, that picturesque headland created by the two harbours of Castlehaven and Blind; both beautiful ingresses into the rugged and jagged coastline where islands such as High and Low, The Stags, Horse and Rabbit lie within rowing distance of the mainland. Christina, my wife, reminds me that I expressed a desire to paint this landscape when we first arrived; however, I became sidetracked, until recently, when I found myself standing in the foyer of the Merrion Hotel, Dublin staring intensely at a small Paul Henry painting; it was of a harbour painted ever so simply. It reminded me of Castlehaven. I returned home and climbed Ceim Hill to paint a small homage. Looking out to another island, The Stags, which takes on the appearance of a castle in certain light, I began to paint. A neighbour looked over my shoulder, shook her head and remarked, “many have tried!” As I worked rain moved up the harbour obliterating The Stags with that familiar grey blanket, cloaking me a few minutes later. Despite the drenching, I have tried many times since – often pondering the two sides of the haven whilst trying to engage with the few who have succeeded; Paul Henry in Ireland, Brett Whitely and Fred Williams in Australia, all great painters who have passed on.

From the top of Ceim our farmhouse is just visible out on the peninsula. It is set in a hollow only a few hundred metres from the steep cliffs that descend vertically down to the temperamental sea, the shrill wintry gales often depositing salt-laden foam into our garden. Soon after we settled we began constructing vegetable gardens from which Christina annually produces a bountiful harvest. With this experience it is surprising to learn that an 1846 autopsy undertaken on this property pronounced the cause of death as starvation. It is possible that this is the first officially recorded death of that terrible blight, commonly referred to as the Famine or more accurately in Irish, an Gorta Mór, meaning The Great Hunger. The only record of their nameless lives was the eyewitness accounts such as those of N.M. Cummins in his letter published in The Times of London on Christmas Eve, 1846. Cummins described in graphic detail the tragedy unfolding on this peninsula that another referred to as the village of the dead.

Like sentinels, ten upright weathered wooden poles that are known colloquially as ‘The Sticks’ stand at the end of the peninsula. Originally eighteen were erected in the millennium year of 2000, all in a line. As the years have passed some have yielded and now lie in the long grass. Artist Susan O’Toole created this work as a blessing to the land where an Gorta Mór impacted with such devastating results. The remaining ten attracted my eye for not only what they represented but also their austere beauty juxtaposed against the ever-changing West Cork sky.

Some years ago, my interest in the history of South Reen encouraged me to attend a lecture by Art Historian Catherine Marshall in Skibbereen titled ‘Visualising the Unspeakable; An Unresolved Dilemma for Irish Artists.’ Marshall introduced her talk by stating that there was very little ‘fine or high art’ depicting an Gorta Mór. Marshall set out a case that the establishment’s control over the artists was so great that they essentially self-censored. It seems this particular history was not to be recorded by the great artists of the British Empire but left to the illustrated newssheets, the tabloids of the day.

Researching the art of the time I visited the library at the Tate Gallery in London. In looking at its original art collection, donated by Sir Henry Tate, I discovered that the benefactor’s sugary fortune was only possible due to the sale of a string of his greengrocery shops in Liverpool. Sir Henry Tate owned these during the years of an Gorta Mór and the profits enabled him to buy the sugar-cube patent whose success established what is now the Tate Gallery. That art collection documents many great historical events but not an Gorta Mór. Sir Henry Tate’s motto, printed on his stationery, was Think and Thank, through which I came to what I believe is a logical conclusion; N.M. Cummins’ powerful letter should hang in a room at the Tate. My reasoning is simple; his words painted the picture that the artists could not. Placing them in the institution built on the profits of luxury food at a time when people needlessly starved connects the various histories in a context that allows us to think about what happened and thank N.M. Cummins for his actions in recording it.

This inspired me to create an imaginary work within the form of an essay that described a sculpture, or to be more precise a room, a one-to-one model, from the Tate Modern that was placed on the lush green landscape of South Reen. Inside, N.M. Cummins’ letter is carved into the walls. Invitations followed and for the Göteborg Biennale I converted a cor-ten steel container into a sculpture of the Tate Modern and placed Cummins’ letter inside. Another invitation arrived from Melbourne. I proposed a related work to my imaginary and Göteborg piece. However shortly before my forty-foot-long glass sculpture of the Tate Modern could begin its voyage, a technical issue caused its cancellation. We had only one option, return the ‘Tate’ to South Reen. In its place I sent the essay and placed it on a billboard in Australia describing the imaginary Tate that by a quirk of fate now actually existed.

Just off this peninsula High and Low are a silent sedimentary witness to the events of the past and present. I stand and paint them, & along with the sentinels that mark the village of the dead, using an old medium, it self-presumed to have passed on. As the autumnal sun sets over South Reen the scudding clouds turn pink then orange as the rays dramatically light up the glass Tate in a field & neighbouring ‘The Sticks’. Inside my ‘Tate’ technology brings to life the voice of N.M. Cummins, describing how the broken bones of so many nameless people came to lie under this landscape of sticks and stones. 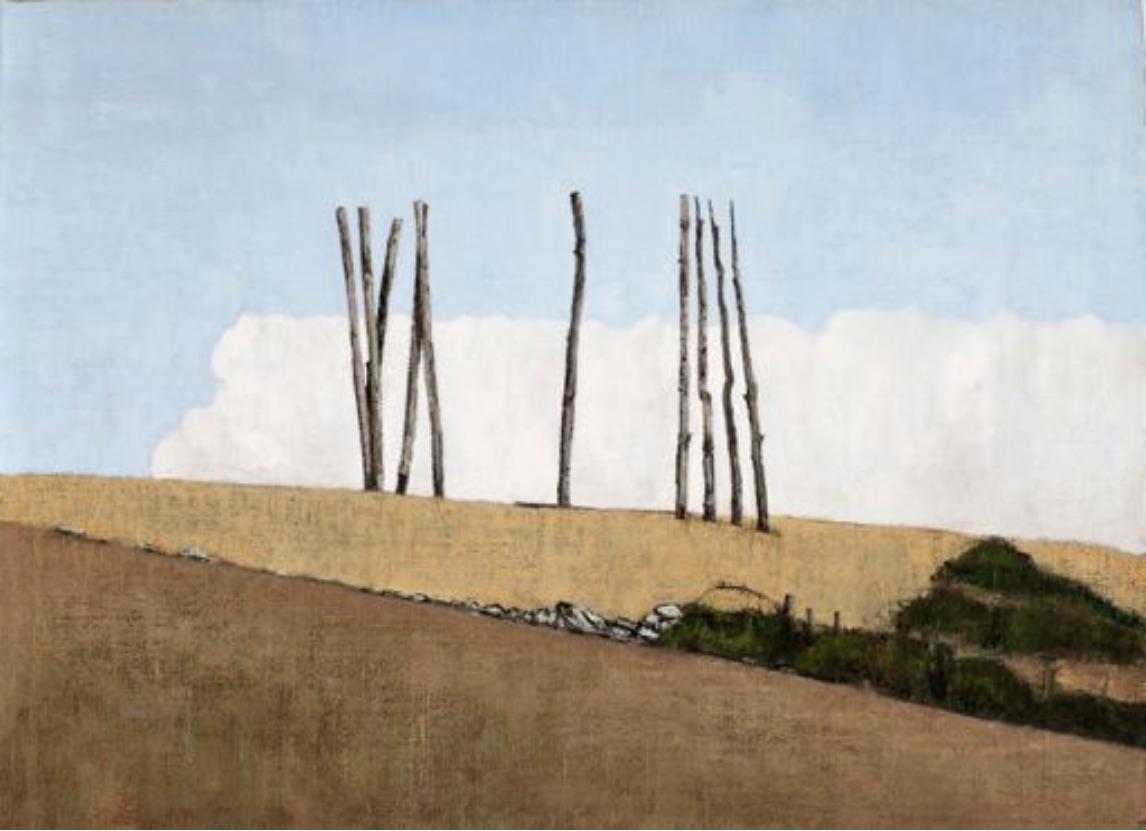 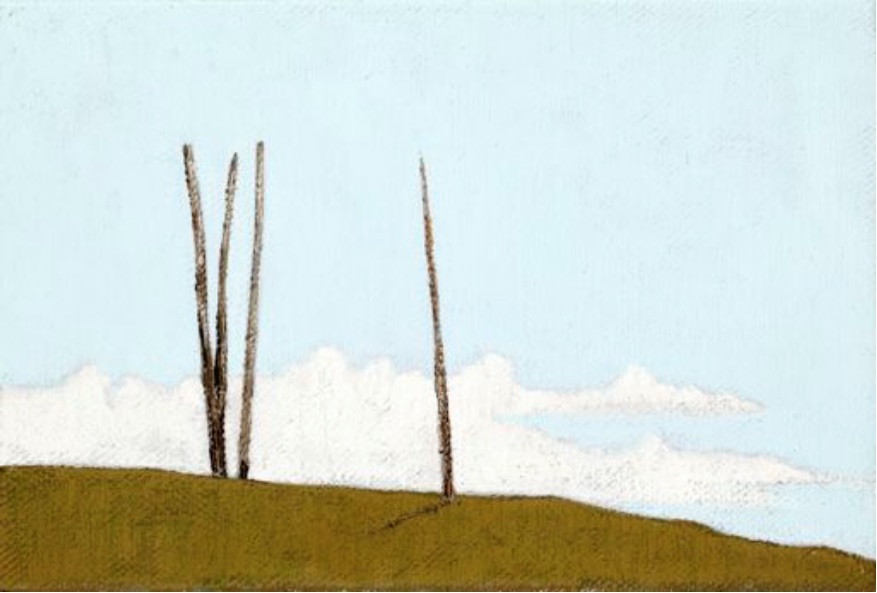 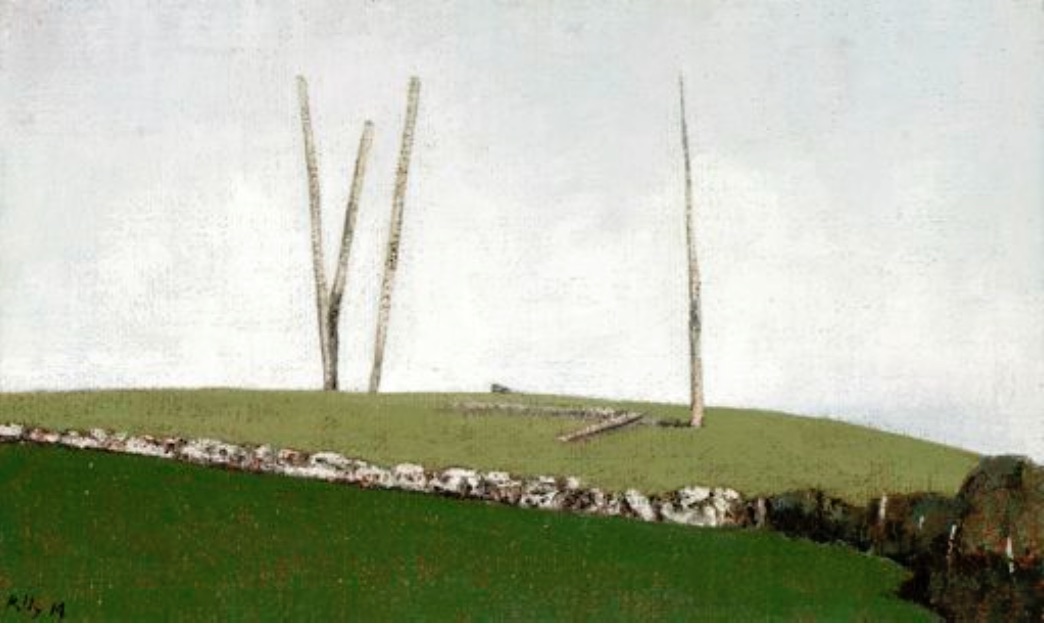 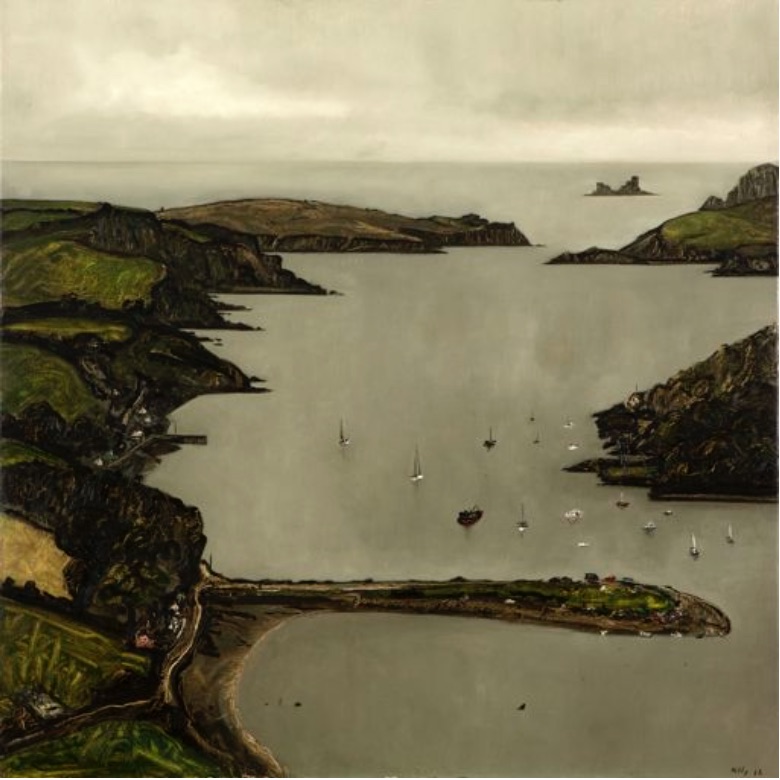 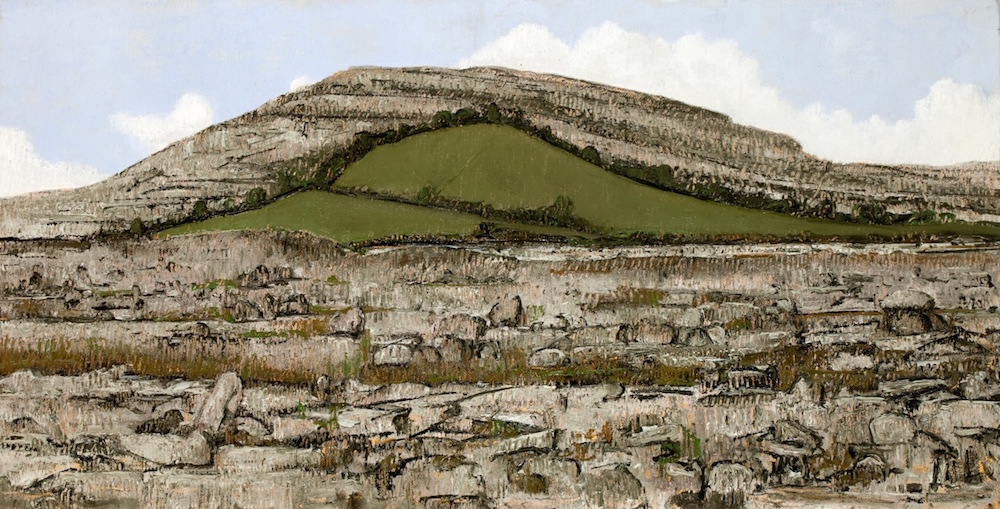 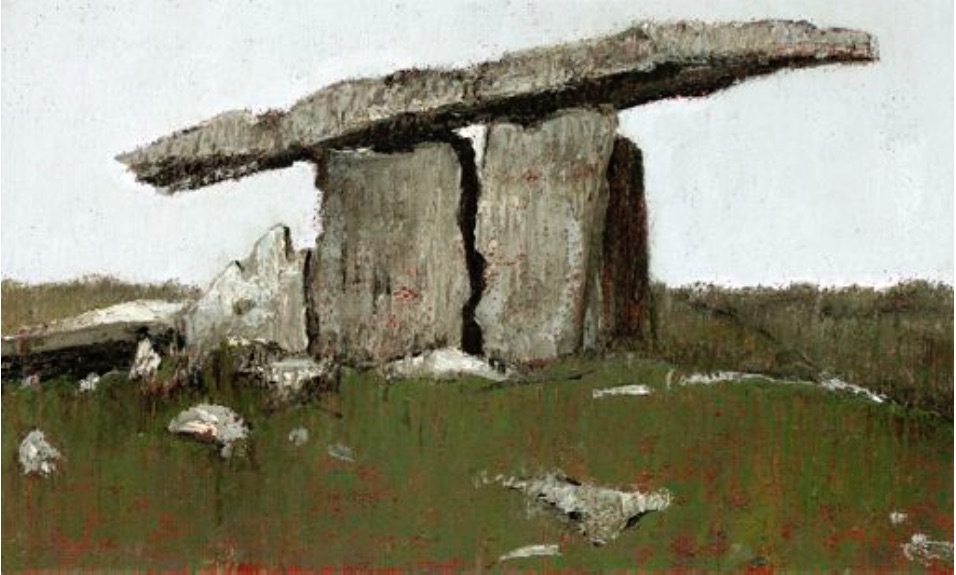 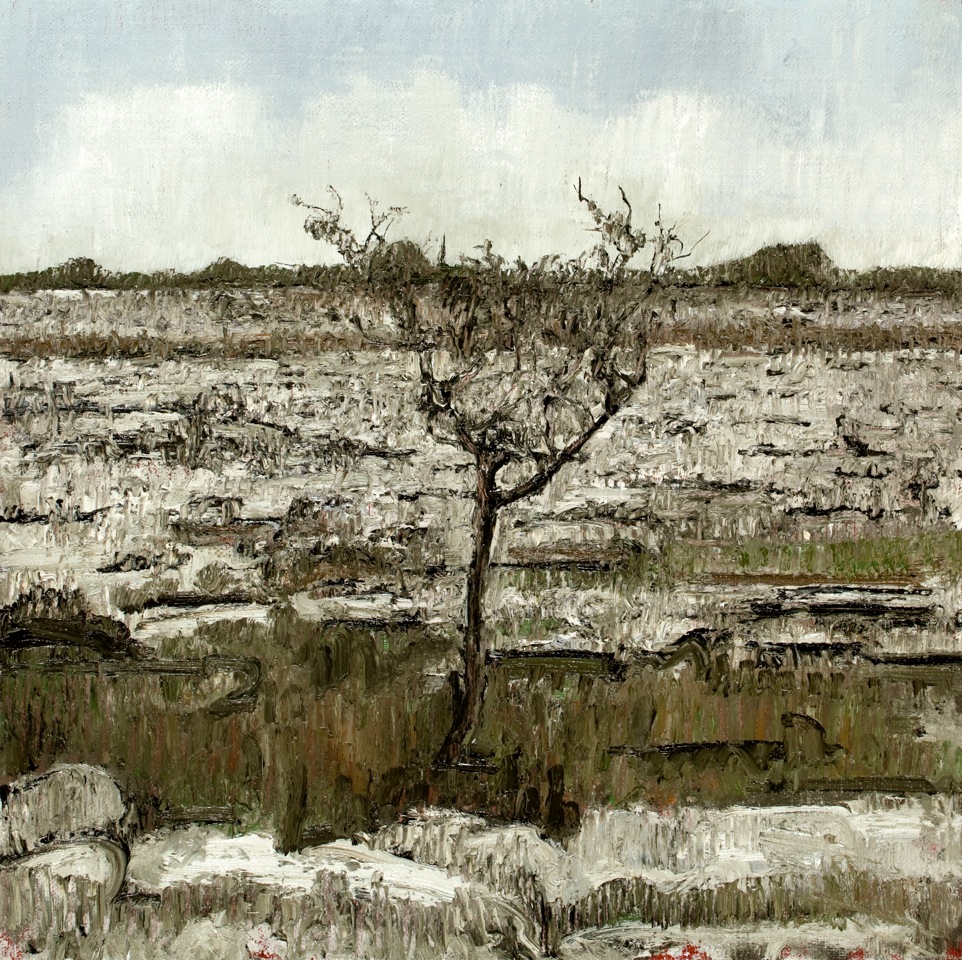